A recent discussion on LXer concerning the greatness that was Kmail reminded me that I never did a good write-up on installing the KDE3 fork, Trinity-DE.

One of the more interesting aspects of this particular discussion is that I wasn't the one to bring up Trinity-DE. Usually, it's me who points out that the wondrous fantasticness that was KDE3 has not left the world, that Trinity-DE is alive and well.

So it's time for a screenshot tutorial on installing Trinity-DE. For my base, I chose Debian Wheezy, using the Xfce-AMD64 install CD. You can choose any of the Debian Netinstall, CD#1, or DVD#1 disks and simply install whichever default desktop it comes with.

If you do choose to install KDE4 by default, then put Trinity-DE on with it, let me know how that goes. It's the one thing I haven't tried yet, since I do not prefer KDE4. 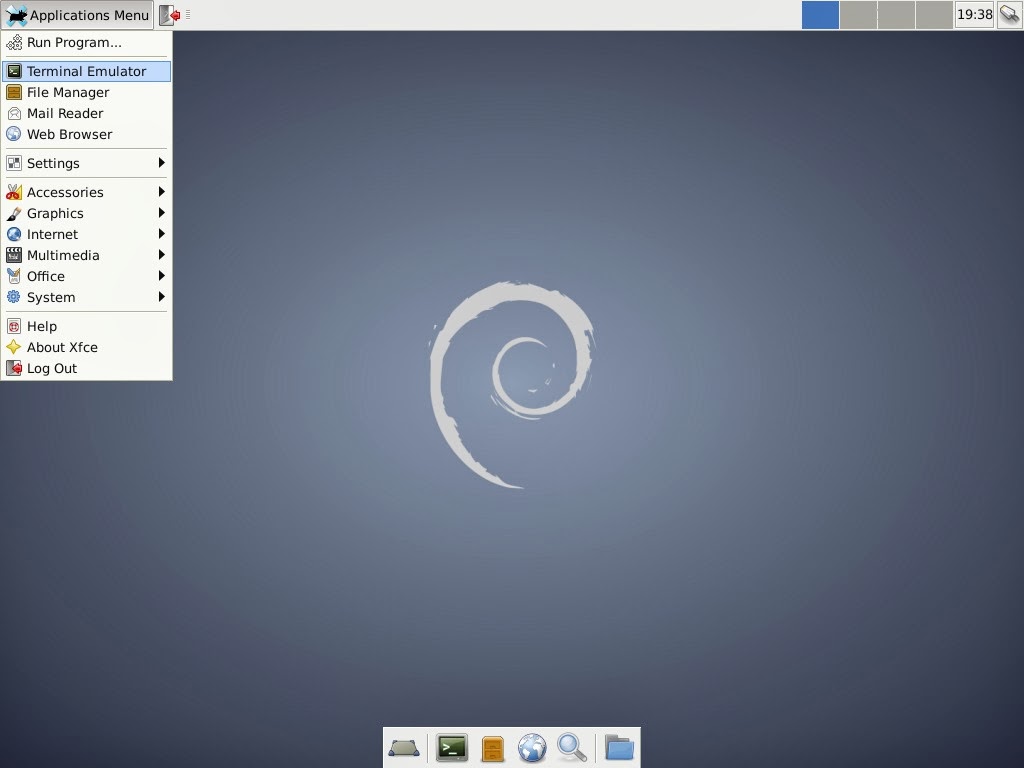 I've gone into the installation of Debian in the past, so you can review if you wish. At the end, you will boot into the completely default Debian GUI, which is wonderfully functional already.

From there, open a console because here comes the hardest part, you must actually type in a console window. The oft-shouted "but you can't use Linux without using the command line" may be true if you don't simply follow the defaults all the time, but I know people who work in tech support and they constantly have to tell Windows users to "type cmd and hit enter, now type...." and so on. It's a simple fact that not every option in computing is covered by a GUI, and using the command line is just as easy as any GUI. It's a fact that if you opened a GUI editor, you would still have to type the words into it. 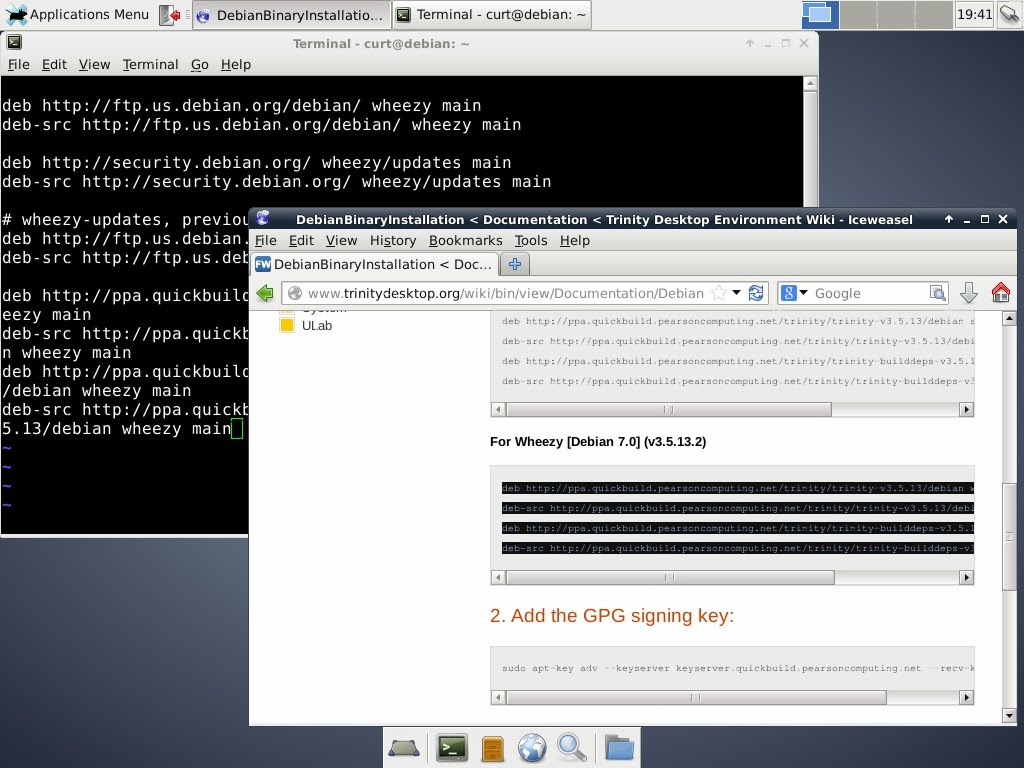 This will open up the file from which Debian's APT package manager draws it's packages. Just do all this as root, so you can avoid the "sudo" stuff, since you're already "Super User".

Do not delete any of the "deb" lines in the sources.list file. Add to this file the lines found on the Trinity-DE web page. The Trinity developers have provided excellent documentation, and made it just about as easy as it is possible to be. Copy and Paste, and save. 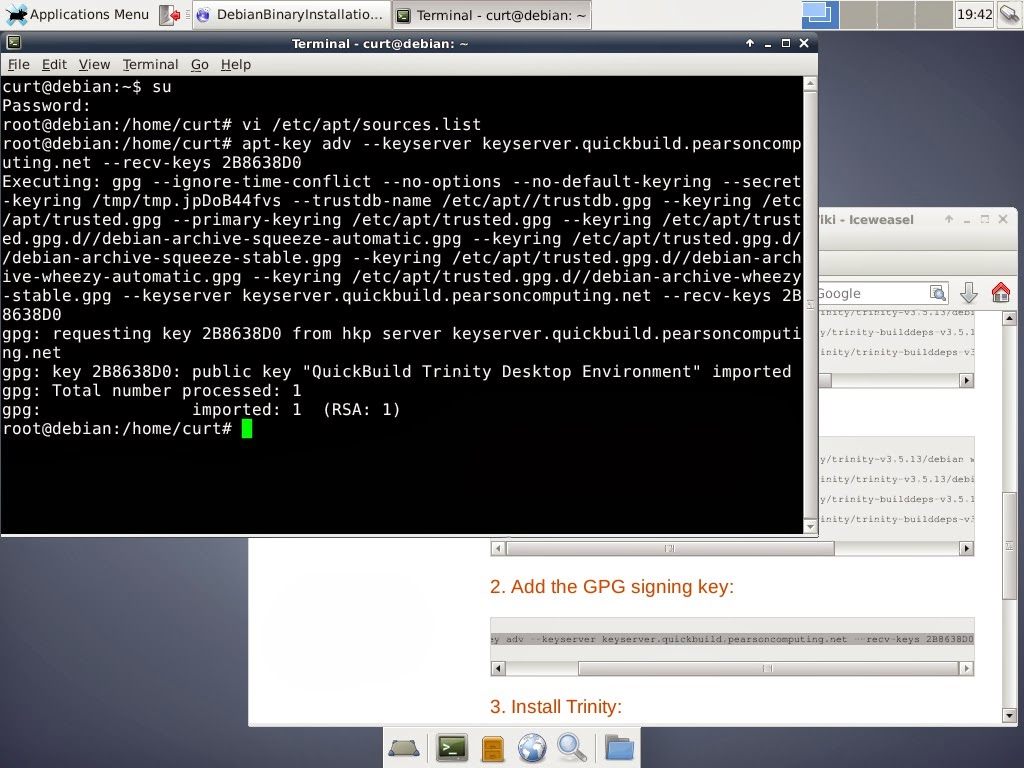 Right there on the web page is also the instruction for adding the Trinity-DE package signing key, so that you don't have to confirm installation every time the packages get downloaded or updated.

Still as root, and continuing with the instructions on the Trinity-DE page, run:

and you will see the list of available packages be updated from all of your "deb" entries in sources.list. 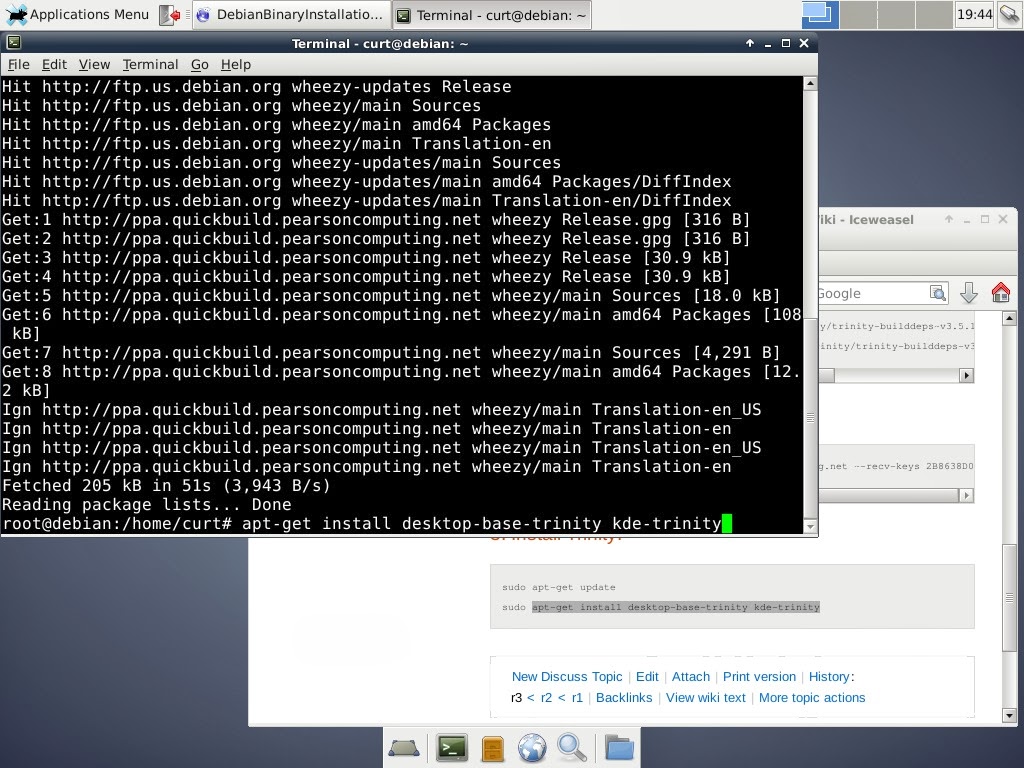 Depending on your network download speed, this may take a few minutes. 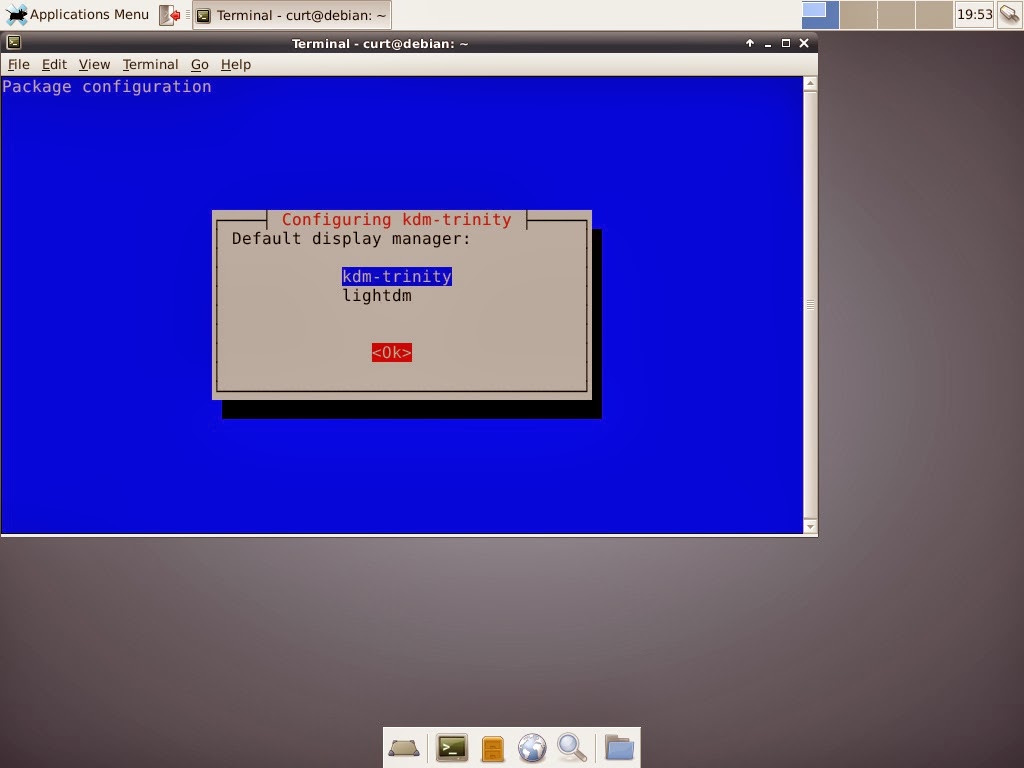 When downloading is finished, you'll be asked which start-up GUI log-in display manager you wish to use. The Debian default is "lightdm", and works just fine. Trinity-DE includes a display manager if you wish to use it. Both work, while the kdm-trinity login can be managed from within the Trinity-DE system configuration GUI toolkit. Useful if you want to set up default users, or password-less logins. So I used the arrow keys to pick kdm-trinity.

If you want to change this at any time, open a console, su to root, and type:

You will be given a list of all the display managers available, just as in the graphic above, and you can choose whichever one you want to be the default. Flexibility: Linux's Killer Feature. 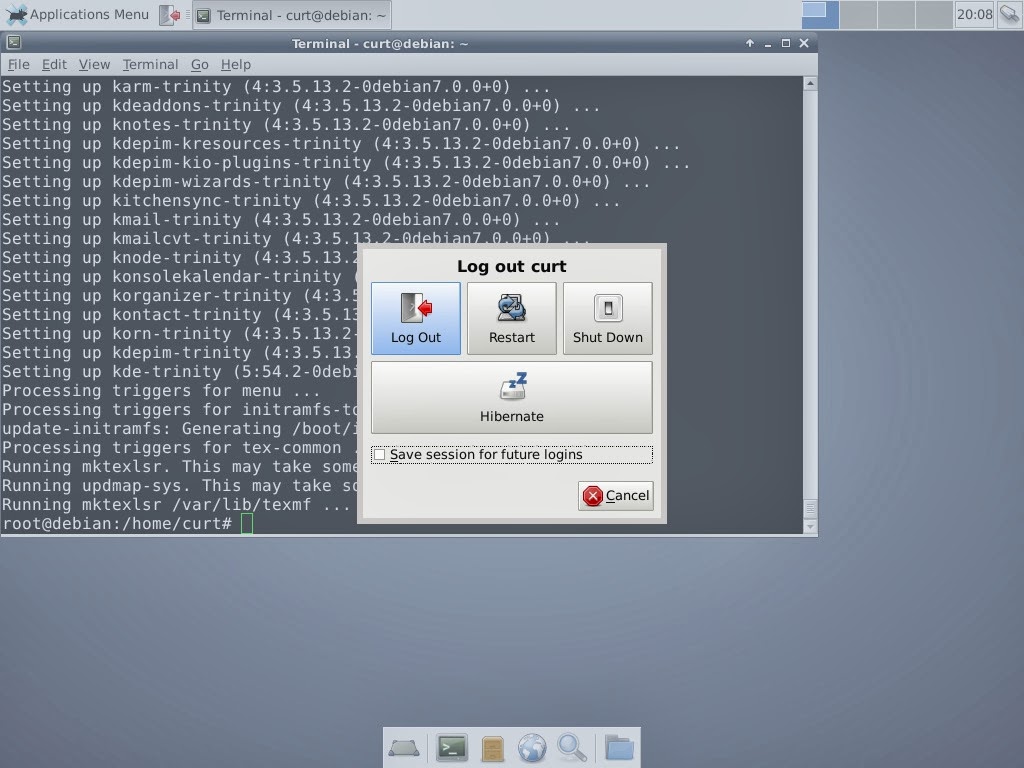 When that finishes, logout of the Xfce session, to go back to the system login screen. 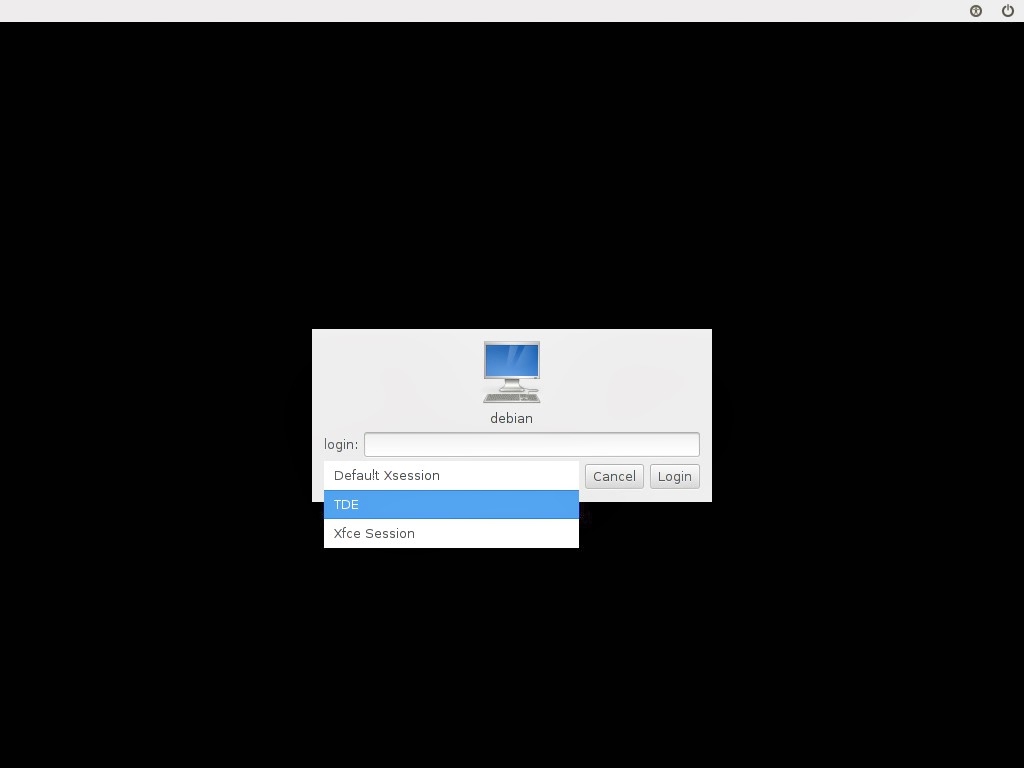 Here we are, back at the default lightdm login screen. If you selected kdm-trinity above, that new default will show up next time you start the machine.

Now, lightdm has the option of using TDE in addition to Xfce. 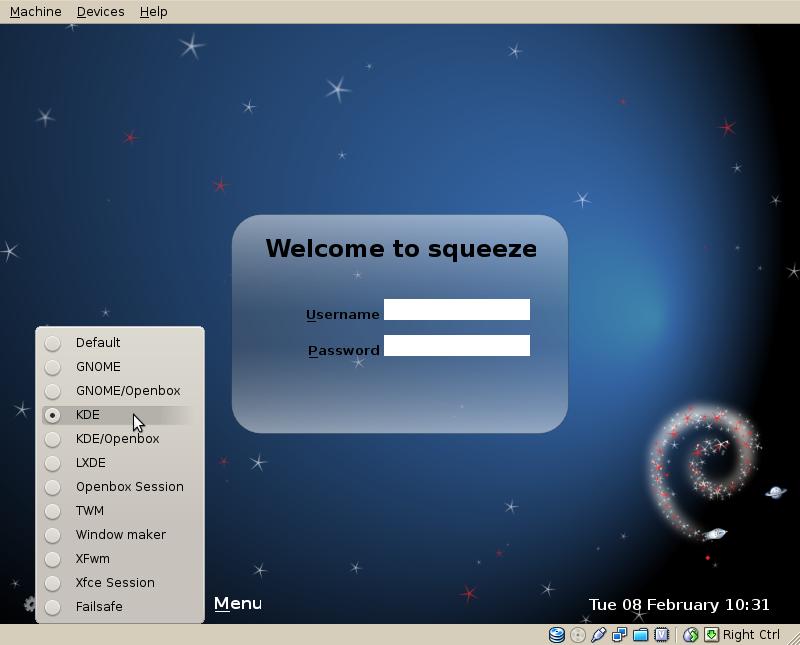 As I pointed out in my article on Linux's Kill Feature, Debian will seamlessly allow however many different "desktops" you want to install to all live side-by-side. This is a shot from that earlier article.

If TDE had been installed then, it would have shown up on that list. 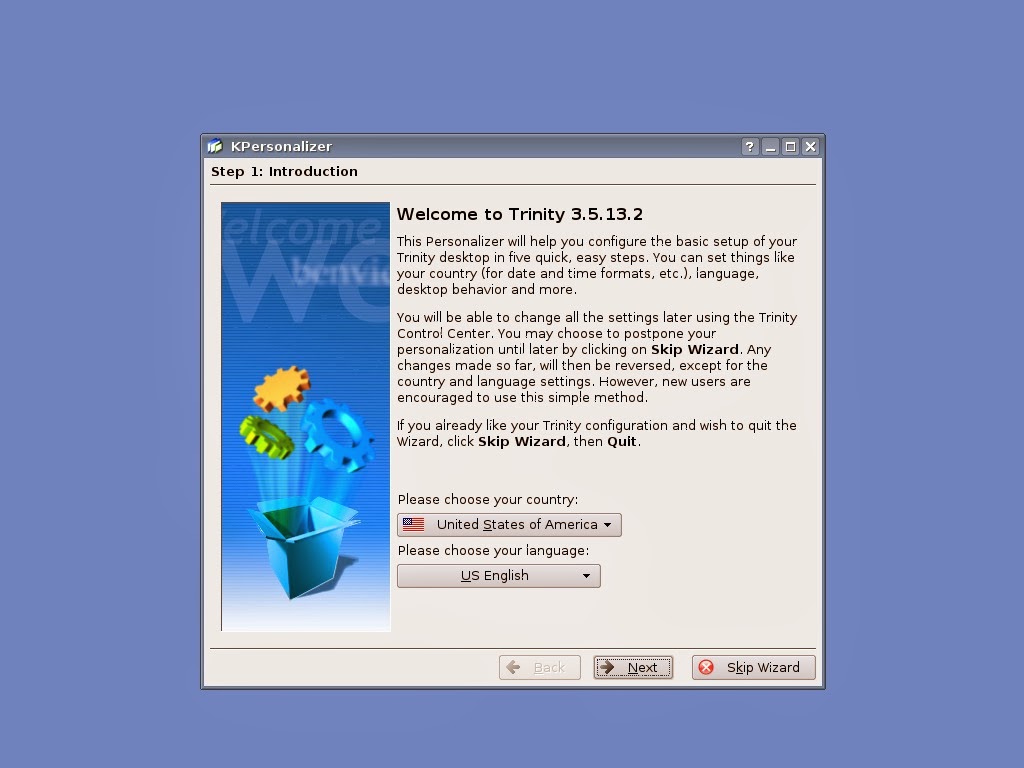 The first time you log into TDE, you will have to select some defaults. As any who has used KDE will know, these defaults are just to get up and running, everything can be changed later on. 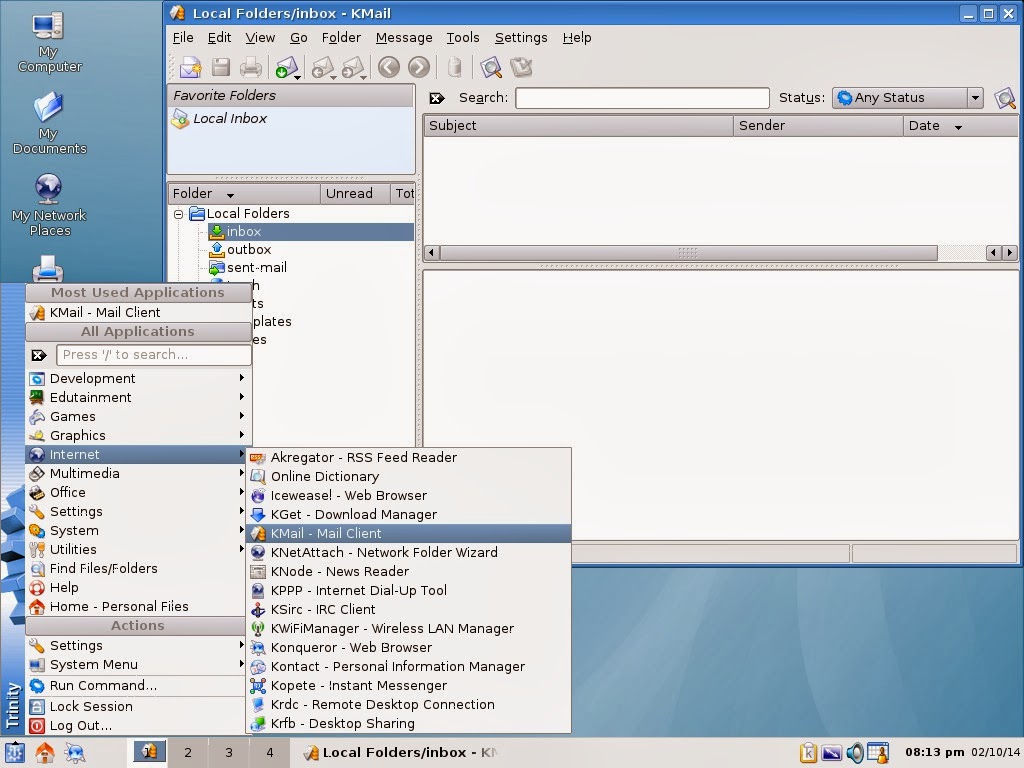 And here it is, your TDE desktop, with those KDE3 applications that made KDE3 the unqualified best Linux desktop ever made. In my opinion.

You can see Iceweasel, installed by Debian with Xfce, and all the other applications such as LibreOffice and GIMP, are available because TDE displays all the Debian-installed application menus. 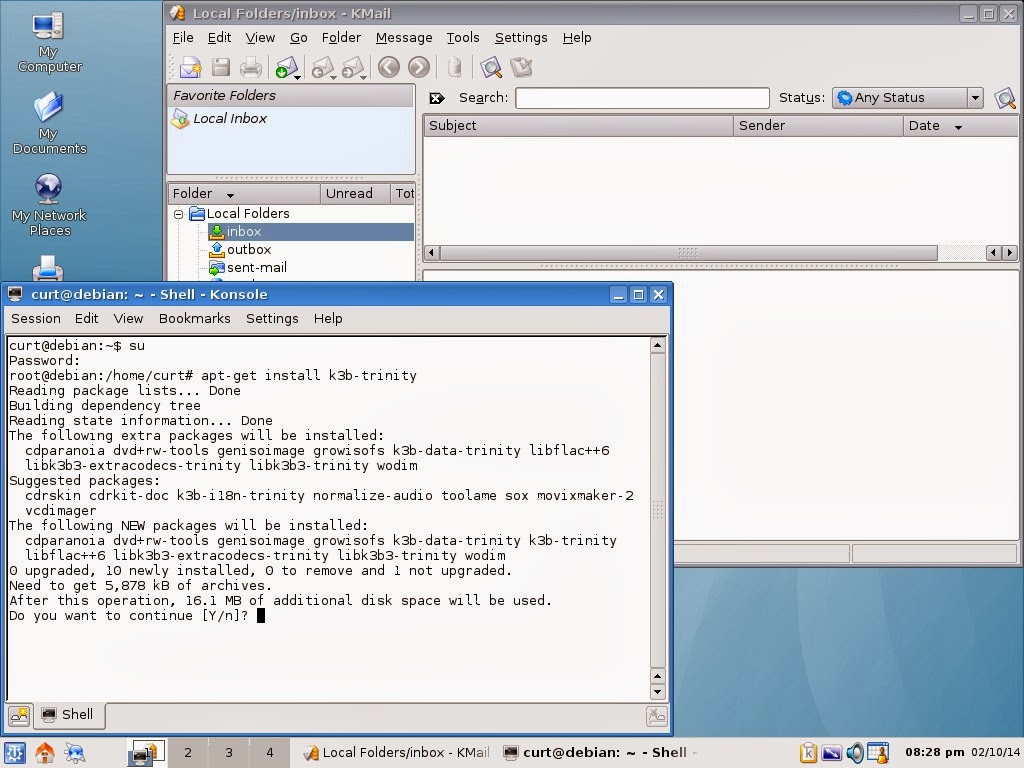 For some reason, one of my favorite TDE applications, K3B, is not installed by default. Ah, that dreaded console again. Su to root, and...

This will also take care of the dependencies for writing CDs and DVDs. 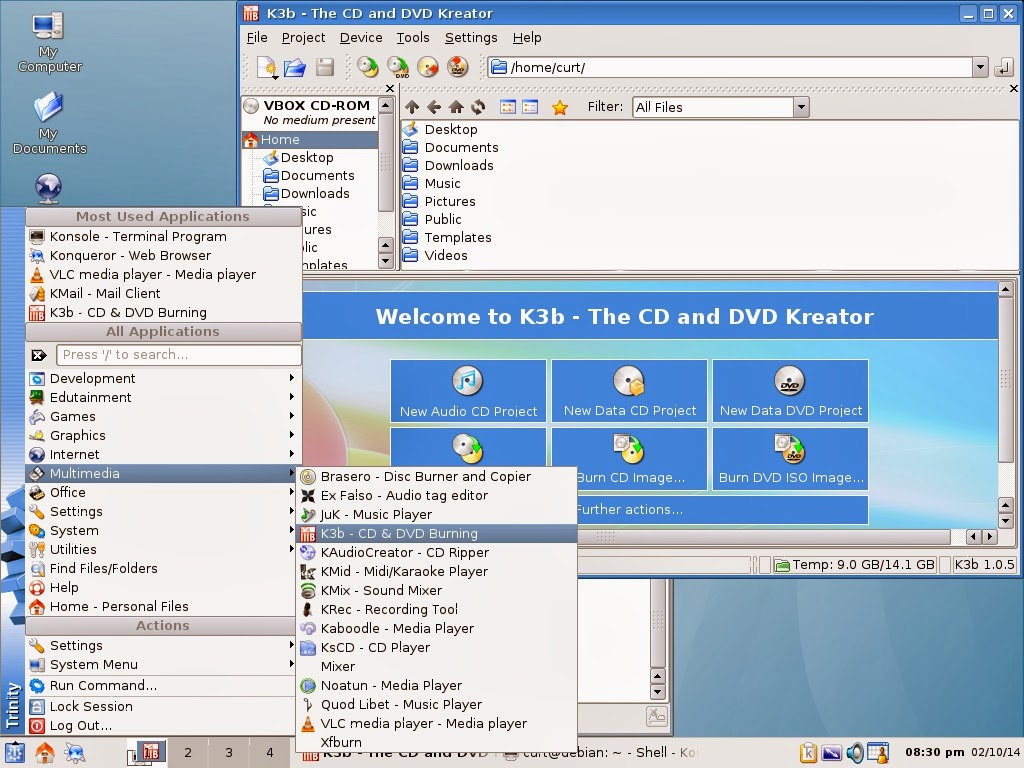 Once that finishes, your menu will now have K3b-Trinity ready to go.

Be aware that if you type just "apt-get install k3b" the version of K3b from KDE4 will be selected, so always check the Trinity-DE web page to confirm the name for any Trinity packages which you might want ahead of time, or if you already know you want something by name, such as Gwenview, make sure to type:

and not just "gwenview". The Trinity-DE people have done a great job packaging everything from KDE3 that I can remember, and more, and I never used it all.

Since TDE provides a standard Debian repository, any tool, such as Synaptic, will show the TDE applications just as it displays, sorts, selects, and resolves the dependencies of every other package in the massive Debian repositories. Personally, I still use "dselect", but I'm a dinosaur. 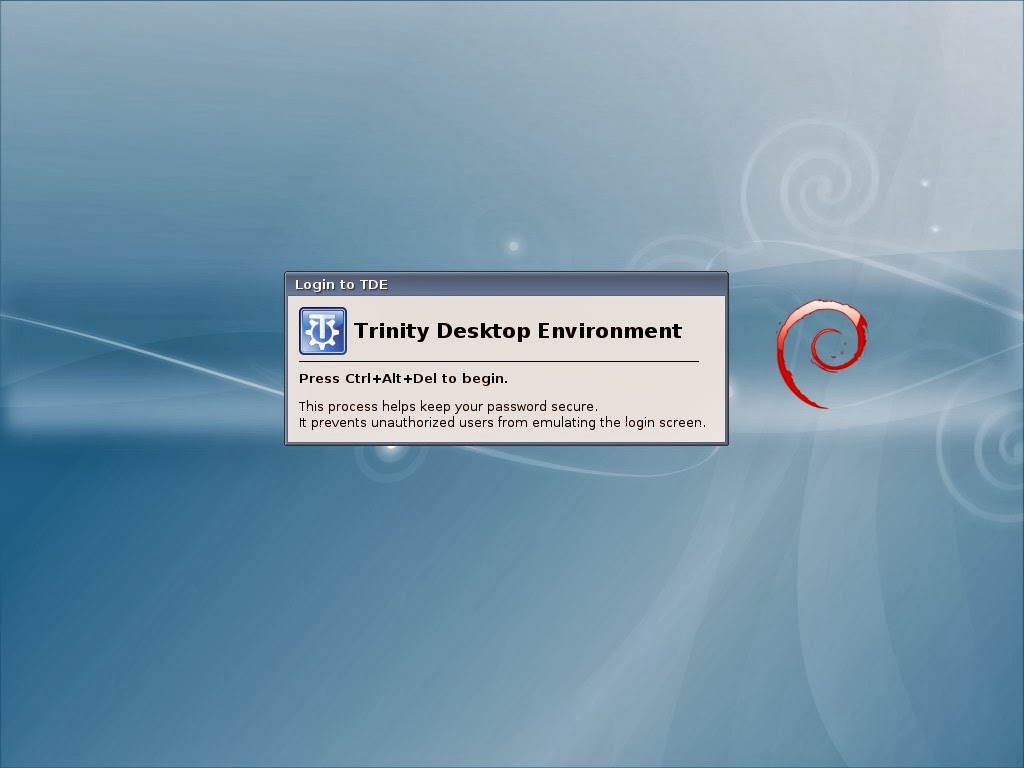 After you restart: The default Trinity-DE login uses Ctrl-Alt-Delete as a security capture. 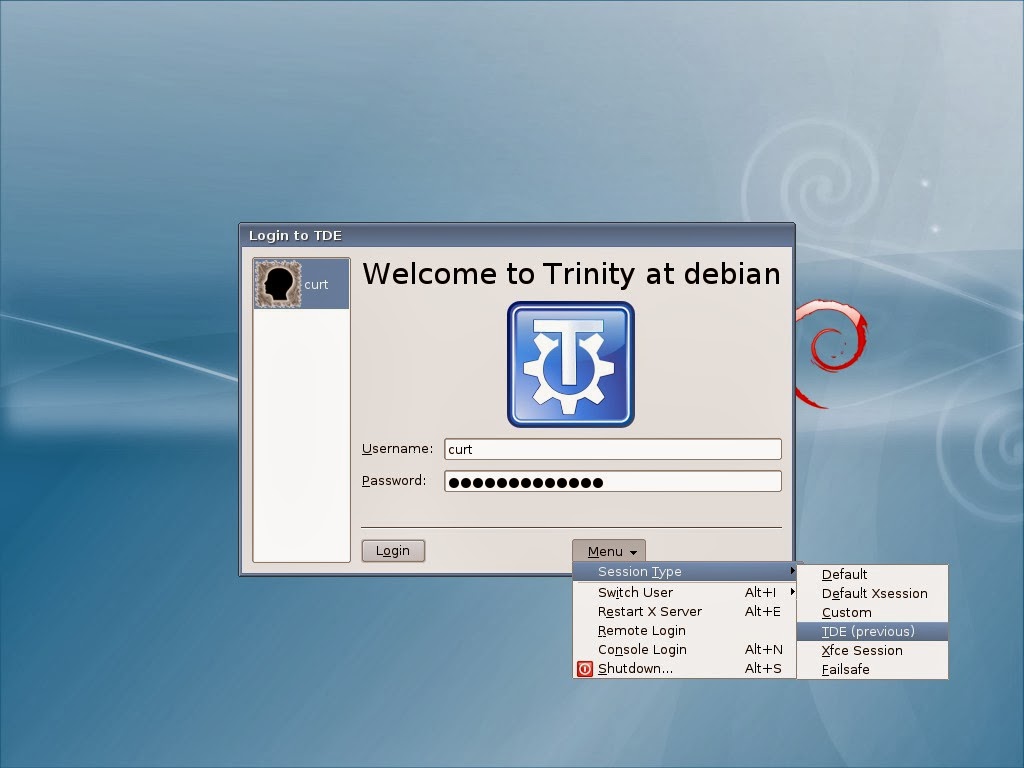 Once past that, you will see the TDE login screen, with the list of available desktop environments. This is the same way that lightdm displayed TDE and Xfce above. 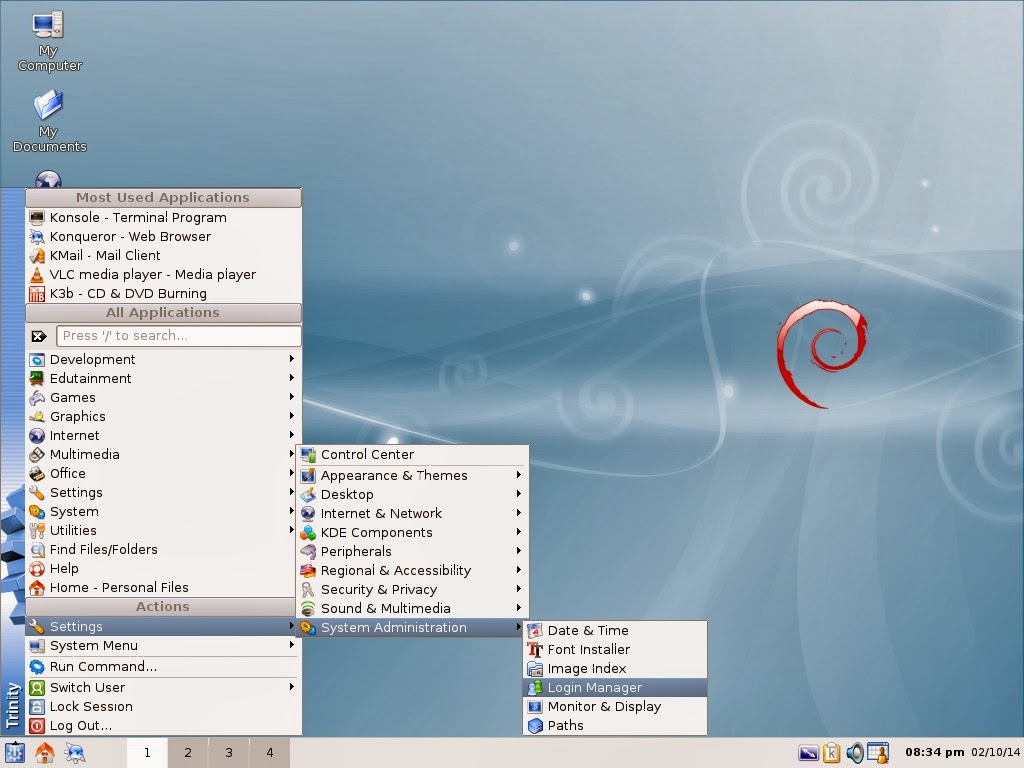 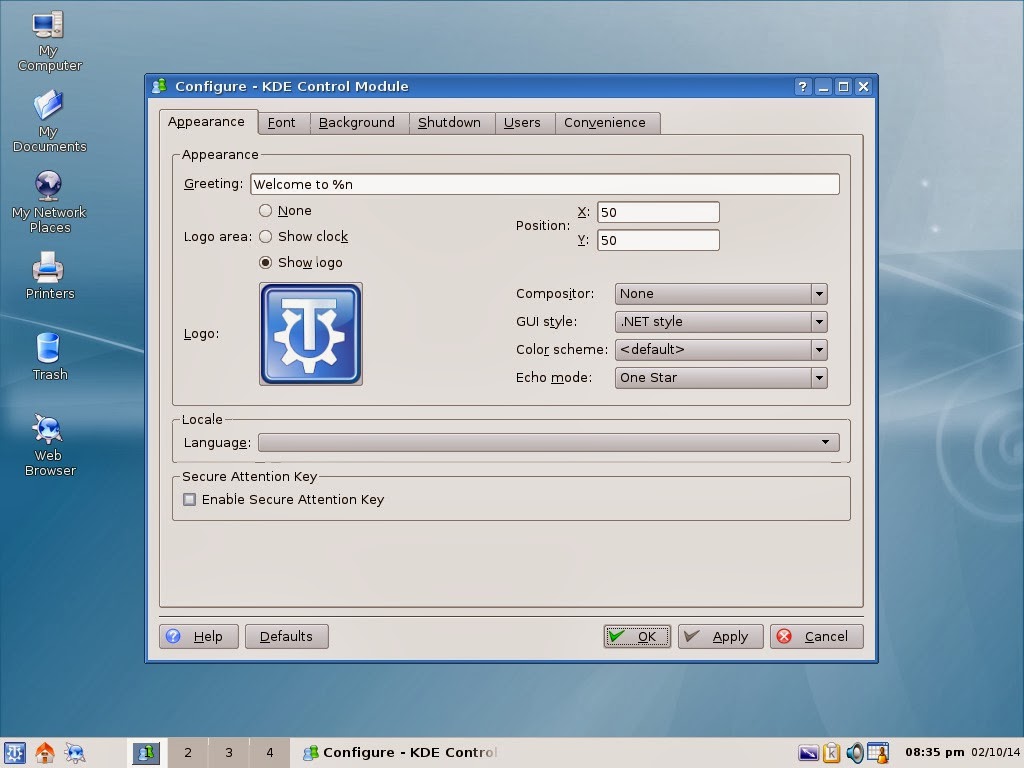 You will need to provide your root password, then un-select "Enable Secure Attention Key"

Do I need to mention "Press OK"? I hope that much is obvious when making setting changes. 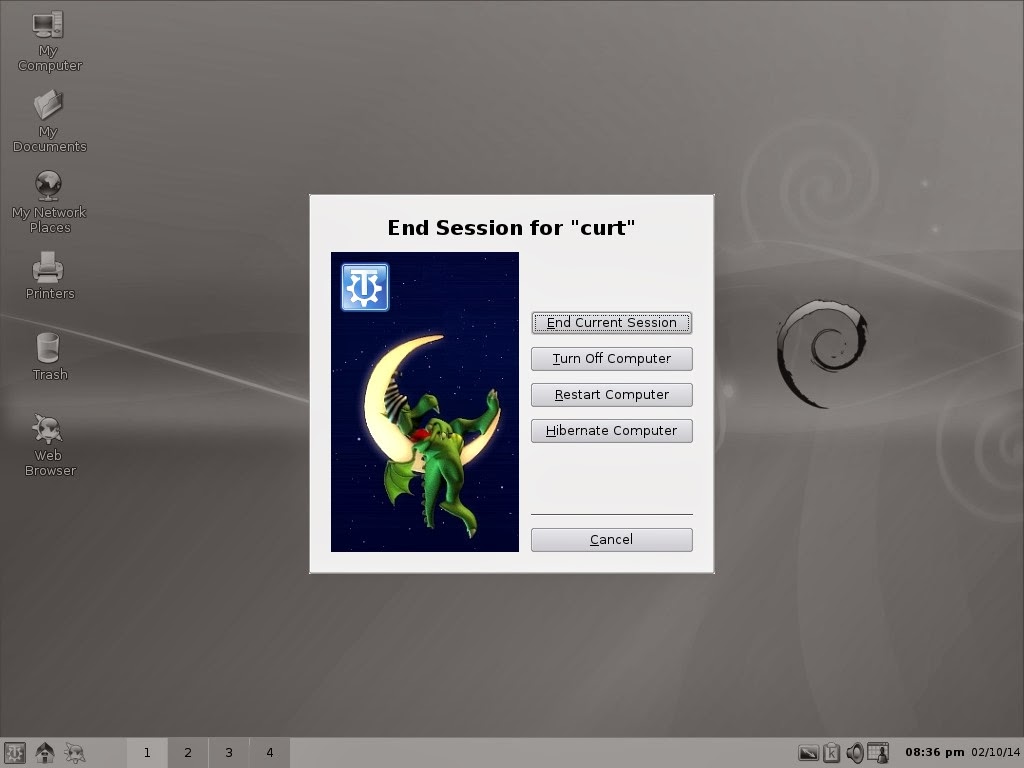 And there it is. The Trinity Desktop Environment installed and running.

Thank you for your time and attention, and thanks also to the wonderful efforts of the TDE developers.

P.S.: If you want to run Debian Testing/Unstable, there is no dedicated TDE repository for them. Install Wheezy, and TDE, and then change the pointers in /etc/apt/sources.list to point to the rolling release you want. Do not change the TDE lines, leave them pointing to Wheezy. 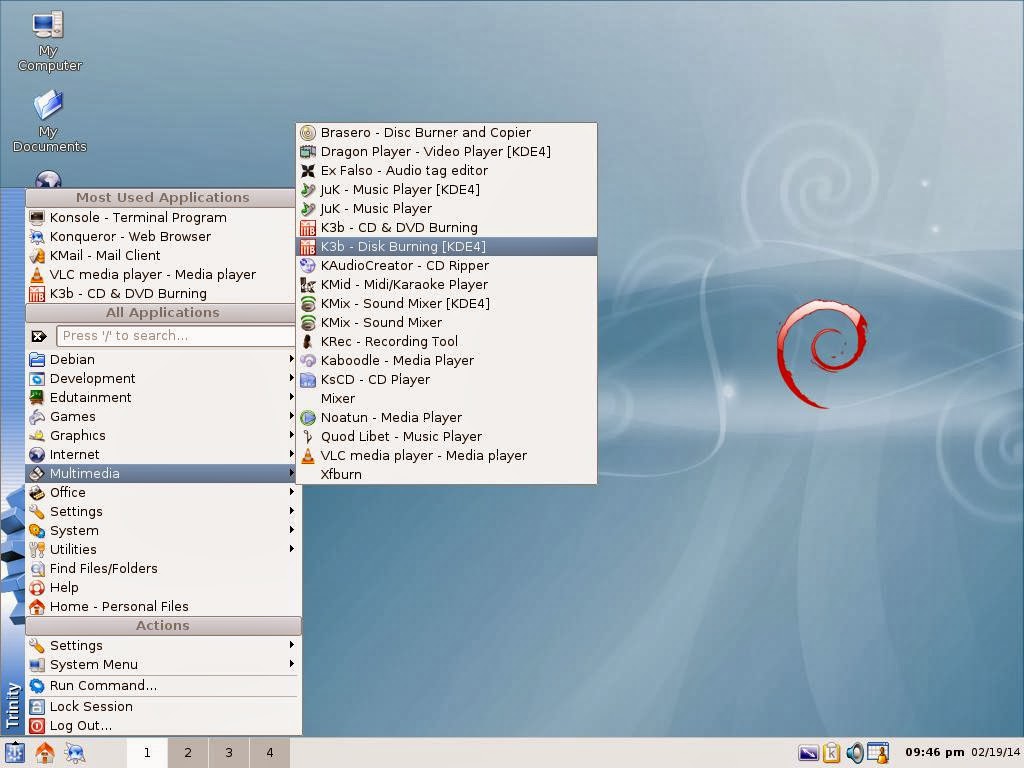 So I took my own advice, and installed KDE4. This is what the TDE menus look like now. The KDE4 applications are all there, and marked with their KDE4 status.