Bodhi Linux 0.1.7 and the Enlightenment Desktop

Bodhi has released 0.1.7, a further development release of the Bodhi Enlightenment desktop Linux distribution. As I've mentioned before, Bodhi is focusing on providing usability with a minimal footprint.

By using the Enlightenment graphics environment, Bodhi creates highly configurable, and aesthetically pleasing, visual effects without loading the system down with bloat.

As Bodhi is a tributary of Ubuntu, and so it's no surprise that Bodhi works as a liveCD and not just an install disk. As an old Debian hack myself, I'm so used to install disks doing nothing but installing that it's still a bit of a pleasant surprise. 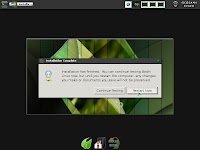 The installation is fundamentally the same as before, so I don't see a need to go into that again. Well, I will say that the final screen now correctly points out that it is Bodhi Linux, I'm glad that the Bodhi developers took my previous poke in the humorous spirit it was intended. 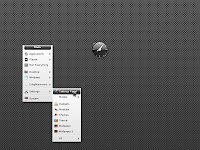 When selecting a profile, I tried the "Bare" style, and found it is, in fact, very bare. Good thing it's a simple matter of selecting another theme to get out of it, although I found out later on getting out of a choice is not always so easy. This ability to swap themes easily, and have the themes do more than just change a couple of graphics, is one of the things about Bodhi Linux that I very much like.

Where in the past I would have to log out and then back in after selecting a different window manager in order to make these kinds of changes, Bodhi and Enlightenment makes these changes trivial. Have some fun with it! 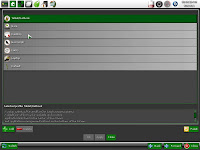 "Tablet/Notebook" is clearly being designed for the netbook/touch-screen systems for which the resource-thrifty Bodhi would be an excellent choice. I found nothing that required more than a left-click, the same as someone using a touch screen would have to contend with, 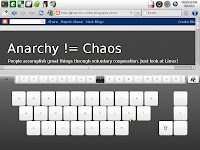 ...as well as big buttons and maximized applications, and very easy switching between those applications. 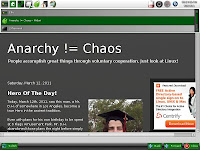 The running application list was obvious once I'd found it, as most "intuitive" things are, but a few minutes poking around will be sufficient for most anyone to get the hang of the Tablet interface.

Now what is that little icon up there on the Tablet theme? Oh, it's the Install button! It's certainly not in the same place as it was when I first installed Bodhi, but it is still there even on a system which has been installed. 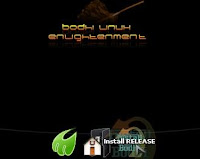 And here it is again. I'm sure the Bodhi developers are going to get annoyed at me. Once a system is installed, leaving an "install" button around doesn't seem like such a good idea. I did try it, and it launched right into the install procedure again, which I did not complete for concerns that it might wipe out the running system.

Can the install button be left out of the installed system? The package manager is installed and the Bodhi software installation system works, as noted in the prior article. It just seems like having the install button sitting there ready to go is, well, dangerous. Like a graphical 'FORMAT C:' button would be in Windows. 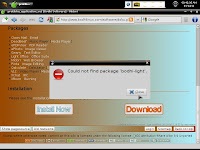 Speaking of software installation, Bodhi conspicuously notified me when I tried to do a software install through their system that the archives are being rebuilt, and they should be all up and working on March 18th, four days from now.


Software installation worked just fine when I used Bodhi 0.1.5 and 0.1.6, so I have no expectation that it will not work again. The selection of default installed applications, including the Midori web browser rather than FireFox which was earlier used, makes for a working system, very much all that is needed to hit the ground running.


It's perfectly acceptable at this time to make adding software a matter of having a network connection. After all, that's how one gets the Bodhi install image in the first place. The time when a CD was needed for upgrading running systems has past. Jesse Smith over at DistroWatch, in his review of Debian 6, noted that the loaded-to-the-gills DVD#1 was "heavy", and that it was unusual for a system to take up less space after installation than it does on the install medium.


While I did go into the reasons for that happening, his making note of the fact does draw attention to the fact that having fully-loaded CDs and DVDs of packages that are not installed by default is no longer the norm. 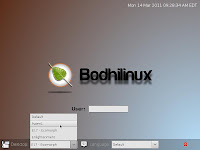 One thing I found, which rather surprised me actually, was that Enlightenment is not the only window manager installed from the nicely thin 380MB ISO image into just barely over 1GB of fixed disk space. There is also Fvwm. 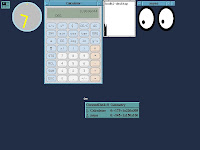 Fvwm is a window manager from the Old School, before scrolling menus, wobbling windows and other uses for spare CPU cycles were in common use.

Many people, like myself, cut their teeth on UNIX GUIs like Fvwm, so I feel perfectly at home with square windows, no shading, and the selection of very traditional X applications that Bodhi installs by default.

This led me into the only dead-end I found in Bodhi, there is no "quit" or "exit" in the Fvwm menu lists. Surprise! Now where is that power button?

Bodhi Linux continues to get better. The basic premise of frugality remains their guiding principle, and even with the additional themes like desktop/tablet, and even the Fvwm window manager and its applications, the 380MB ISO and 1GB installed system make for a very light and quick system to get running.

I'm reading Neil Stephenson's _Anathem_ right now, and Bodhi reminds me of "Keeping to the Discipline", of doing what needs to be done without making the end user do more just for the sake of doing more.

I look forward to the next release, which I expect will continue to refine and improve the "dicipline" of Bodhi Linux.