Windows Is Not Free

Three years ago, I read one of the finest articles on the issues concerning the difficulties faced by the advocates of Free and Open Source Software (F/OSS or FOSS), and the endless efforts to get people to give F/OSS an opportunity to work for them.

The article is "Windows Is Free: The Impact of Pirated Software on Free Software", along with the follow up article by the same author, "No Really - Windows Is Free."

Commonly, people first gravitate to LibreOffice, OpenOffice, Linux, the GIMP, and other F/OSS applications because they are, almost always, gratis. That is, free of a monetary cost. But, as is persuasively argued, for a large number of people, so is Windows.

And because of the flexibility of F/OSS, a large number of individual F/OSS applications run just fine on Windows and Mac systems, so there is even less motivation to examine the underlying principles involved.

One of the major reasons for this confusion is the fact that in English, "free" can mean both "gratis", as in no price, and "libre" as in without restrictions.

People who use F/OSS on a regular basis, or who have changed to F/OSS after using proprietary software for the same purposes, including resellers and manufacturers, come to realize that the "free as in beer" aspect of F/OSS is actually not the best part. 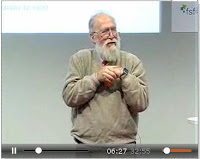 In My Opinion, this talk deserves to be heard by anyone with even the slightest interest in software, from the kid in mom's basement to the purchasing executive who wants to improve his product and his bottom line.

For years (decades!), Richard Stallman has been telling anyone who would sit still long enough to listen that the most important part of software "freedom" has nothing what so ever to do with price. It has to do with the freedom, the liberty, to use the programs, modify the code, AND understand the formats, so that those fundamental aspects of computing systems can be adapted to one's own needs, rather than the other way around.

MadDog does a wonderful job of communicating the benefits of this software liberty, and why Closed Source applications do not, and cannot, meet the needs of its users, because the users are forced to adapt to the software rather than the other way around.