When last we left the scene, one server was dead, the desktop dieing. However, ordering two new motherboards was successful. They arrived from Magic Micro quickly and in good order, and it was time to clean things up and make two working machines. 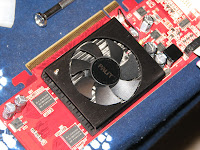 First, a note on cleaning. I am sick (and tired) of computer hardware that cannot be cleaned. Laptops that require being sent back to the manufacturers in order to be cleaned, things like that. I remember one call to Circuit City for a Sony Vaio laptop I owned, where the person who answered the phone simply did not understand what I meant when I said the fan needed to be cleaned.

I had to let her go to her script and answer the question "Is the machine overheating and shutting down?" with "Yes", because if I didn't say "yes" she didn't have any option for having me send it in for cleaning at all. So they did the cleaning, and wiped Linux, but I've learned always to do a full backup before letting anyone else even touch my machines.


What is pictured above is an Nvidia GeForce 8400 GS video card, which I decided to use rather than buying on-board video for my main desktop. Two benefits of doing so are to relieve the CPU of as much responsibility for graphics as possible, and to avoid losing any RAM to the video function. Even though I didn't use the onboard video once the previous motherboard experienced video trouble, it still reserved the "shared memory" for video. The free command now reports a full 4GB of RAM, of which Linux with half a dozen desktop applications open uses less than half.

It also saved some $60 off the price of the motherboard. Such a saving is not a feature to be ignored!

The video card has its own fan and heatsink, which is nice, but it's got three tiny screws holding it together which is a pain in the butt. 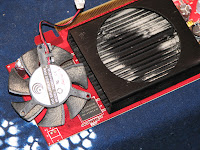 If you're brave, or foolhardy, enough to take those three screws out, the heat sink can actually be cleaned if you have a vacuum cleaner and a toothbrush. But whatever you do, don't lose those little screws. 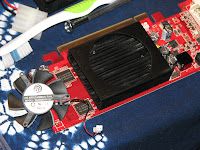 The results are to have what might as well be a brand new video card, pictured along with the screwdriver and toothbrush.

I do the same process on my CPU heat-sinks, fans, and vacuum out the case every few months when I get the thought it's about time to do so.

Certainly having the motherboards to replace is an excellent time to vacuum the cases completely clean. 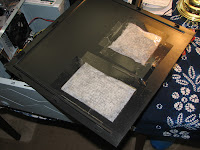 This vacuuming is in addition to having used dryer sheets taped over the case holes which do a wonderful job in keeping the larger particulates, like hair, out of the case.

One laptop I took apart to clean had so much hair built up on the cooling fins that I was shocked it worked at all. I contacted the former owner and asked him, "So, how is the white dog?" He was surprised that I knew he even HAD a dog, until I told him that what I had pulled out of his old laptop amounted to a felt pad of white dog hair! 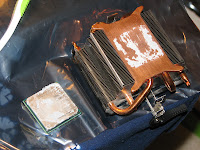 When you replace the CPU heatsink, always clean the CPU and the heatsink thoroughly, removing all the old thermal compound. In order to get the CPU out of these AM3 sockets, you have to remove the heat sink since they have this little trap contraption that holds the CPU leads securely. So no matter how perfectly the old heat compound worked, don't get attached to it. Let it go, move on, use new compound. The best heatsinks come with compound pre-applied, make sure to ask when you buy a new one.

Some day I'd like to try one of the water-cooled CPU heatsinks. I looked into it on a lark, and the one that seemed nice had a radiator that was much too big for any case I've ever had! Good thing I didn't buy it, I hate sending back something when the reason it didn't work was my fault. 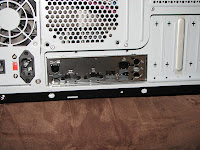 Back to the cases. While you have the motherboard out, make sure to route the wiring cleanly for good airflow and easy access, and be careful not to over-tighten any screws.

If you're going to replace motherboards, the new ones will come with these gnarly little panels that fit the motherboard I/O ports so that the case could have been made for that particular model of motherboard. Just make sure that the new little rectangular piece of steel is put in from the inside so that the panel is more secure with the motherboard in place. Just in case you didn't know. 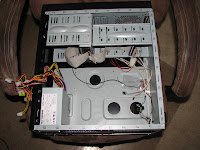 Motherboards are attached to the case by posts that hold the circuit board with all those little solder points away from the metal case. Go through and tighten those posts BEFORE trying to put the motherboard in, not only "just to be sure", but also to COUNT THEM and make sure that each of the posts lines up with the holes in the motherboard. The PC has become so standardized that any ATX case really should fit any ATX or mini-ATX motherboard. But the case will have lots of screw holes for those posts that will not fit every motherboard. 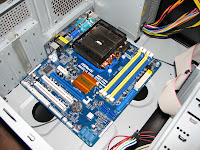 Pick up the motherboard, hold it up to the light, a window, whatever it takes, and make sure you COUNT THE HOLES and know where they are, and then make sure that every hole has a corresponding post, and every post has a corresponding hole, to avoid short circuits and give you a secure attachment not only to the case, but so that you can add and remove cards in the future without putting undue stress on that expensive motherboard. 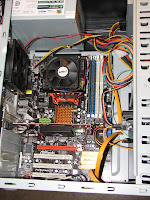 As you can see in these pictures, the two motherboards are different sizes. That one above has 6 holes, the bigger one has 7. When I pulled the broken motherboard out of the lower case, there were only 6 posts, so I added one for the motherboard to have maximum support. The hole was, in fact, right in the middle of the PCI card slots, and if you look closely you can see that it's a different kind of screw from the rest of them.

Ah, the miracles of digital photography. 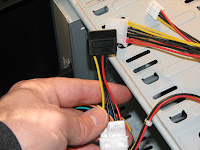 During this time, I received the four-pin to SATA power adapters that I'd ordered from Hong Kong, so the new optical drive is working perfectly as well.

One last bit of advice: Always, ALWAYS HOOK UP ONE CABLE AT A TIME. Make sure that one cable, be it LED, SATA, IDE, USB, power, whatever it is, is fully seated in its receptical and locked down if a lock is used. Wiggle it. Double check it's in the right place, that it fits easily and securely, and is not interfering with anything else before moving on to the next cable. The same can be said of BIOS options. Get out the manual and walk through the BIOS one option at a time. I don't pretend to know what every option means, but many times I've stopped at an option and said, "This is something that looks like I should make sure." And, sometimes, it is.

That may sound pedantic and even overly cautious, but I've put together hundreds of PCs over the course of three decades, and when I have had problems it was when I assumed everything was OK when it actually wasn't. Looking at each screw, each jumper, each cable, each drive, one at a time by itself as it is installed into the case means never having to second guess yourself later on as to whether it was set right or not. 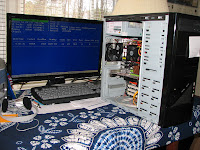 Things have gotten far, far easier than they used to be, but there are also far more options, far more different connectors to check, than there were on an XT motherboard running at 4.77 MHz.

Yes, that Memtest86 screen is reporting 9016MBps RAM transfer speed. DDR3 1600, and I admit that any time I use another computer after having gotten used to this one, it feels slow as molasses.

Almost everything works, the hardware is clean, and I have two backups that I never used. But then, it's the backup that one does not have that will be the one that's needed.

Here's what's not working: I have a "old" Lexar USB memory card reader that works perfectly well with every other computer I've used, including the new mini-ATX server, but the gnarley-fast desktop shows kernel dumps half a dozen times with "reset high-speed USB device" errors for several minutes before a card inserted into the reader is recognized, and then it works just fine. ...until the next time I put a card in the reader, when it gets the same errors all over again. 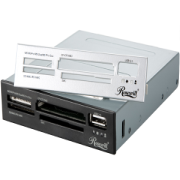 I've ordered a multi-card reader that I'll put in the 3.5" drive slot, and I'll see if that works any better. In the mean time, if I don't mind letting the card sit there for a few minutes, I can still get my camera's pictures, but it's an annoying problem that I'd really rather not have.

Peace, may your aim never waver,