Integrating the Menu into the Ubuntu Unity Window Titlebar

I just read a very interesting post about placing the menu bar into each window titlebar in Ubuntu's Unity desktop.

With ever increasing sizes of screens, this means much less mouse movement to reach the application menu, but as the person who created this mock-up,  Andrea Azzarone, said, just how is someone to move the window frame if one cannot so easily "grab the title bar"?

This is a very interesting idea to me, one of those fundamental changes to something that has been "standard" ever since the Mac first presented the rest of the world with what we now all know of as the "Graphical User Interface". 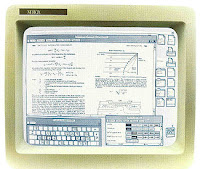 Here's a shot of Xerox's GUI that, according to various histories, started it all.

As you can see, right from the start was realized the functionality of window title bars with the buttons we know and use every day.

I'm no fan of change for the sake of change. My favorite car was one in which there was maybe one diode, and nothing that couldn't be repaired or adjusted by me with basic (metric) hand tools. I wore that car out! What a beast.

This idea of using the title bar for real functionality is a fascinating one, and it is interesting that the article above notes that it can already be done in KDE4.

Wow, the things one learns every day! I personally do not like all the things that KDE4 does. I was a great fan of KDE3, enough to today be using the Trinity Desktop fork of KDE3.5, even though I don't consider it the ultimate answer.

Here's to the fantastic and wondrous variety possible in F/OSS while all the while working with standard applications and files, so that each person can have what they want without compromising the quality of their interactions with others who are doing something different.

"Look and feel" is the most personal of all the attributes of these things we have come to call our "computers". The proprietary software companies keep trying to make their offerings "pretty", but I have never come to think of them as MINE.

I wonder what new things I'll learn tomorrow?
Posted by Curt- at 09:31