When The Net Was Young

I would like to wax philosophic on a subject for a moment. My apologies to anyone who doesn't care. 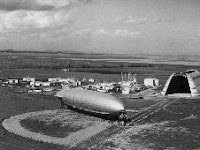 I started working at NASA Ames Research Center in July, 1992. Prior to this I had worked as a computer operator then network engineer for a large multinational, and I'd been using network services starting with Compu$erve in 1983, then Fido-net, I-link, many BBS's, etc.

Being about as close to the heart of things as one could get, and working the graveyard and evening shifts, gave me a wonderful ring-side seat to watch as a Liberty occurred.


Ames was the location of the Metropolitan Area Exchange, West. MAE-East was located at Goddard Space Flight Center, also my responsibility to monitor and help fix. This was where, if you were an "Internet" participant, your circuits were connected so that your IP packets could be routed to other "Internet" participants. Ames and Goddard also had two of the primary Root Name Servers, which I believe are still being run from there.

The machines that held the look-up tables of Internet participant's addresses were owned and operated by the National Science Foundation. I had to watch over all this and make sure that the right people were notified if anything went wrong, so I was pretty much on top of who-owned-what.

If you're old enough to remember, recall that AlGore had been pushing the National Information Infrastructure, or "Information Superhighway", before he became Vice President. HillaryCare was in vogue, centralization not yet the boogeyman in the press that it was to become. The Information Superhighway would have been 6 peering points connected to each other, and everybody would have had to connect to one of these points by law in order to talk to anyone else, anywhere, by computer.

He and the other bureaucrats and politicians who supported the plan tried to assert that, like the Interstate Highway system has always been justified, long-distance data networks for use by the public are just too expensive for "private" efforts to successfully build. The backbone would have to be so big that only the Federal Government could successfully build it.

Since I was working graveyard, then evening shift (graveyard and I don't get along), I don't recall the exact date that the change occurred, but here's what it was: The National Science Foundation released control of the routing tables and eliminated the rules against commercial use. In fact and effect, they threw open the "Internet" to anyone and everyone that agreed to use the Internet protocols as defined by the Internet Engineering Task Force.

In preparing this for publication, I found only one reference to this event, in a tutorial entitled "History of the Internet." So it was before May 1993, when the NSF put forth a proposal  (NSF93-52) for four high-speed Network Access Points in addition to the MAEs. Well, that link lists MAE-East, so maybe only 3 more. But it doesn't matter, because once commercial access was allowed, change was so fast that all the old preconceptions about speed and traffic went out the window.

Until that time, the NSF had ruled who could connect to the "Internet", how to get to them, and what content was allowed. That had also been the model of the Information Superhighway. Now it was up to the company or organization who connected to the MAE "ring", or any other peering point, to maintain their own routing tables, their own equipment, and to decide who they would reach and who they would not reach.

As an aside, even then Sprint sucked. It's been 10 years, they're now my local phone provider, and contacting their so-called "engineers" to solve problems remains an exercise in bureaucratic diarrhea. The stories I have....Ah, but that's another rant.

The MAE-West, and -East, expanded to include other facilities because all the people who wanted to connect couldn't fit in the old buildings. It wasn't really explosive as it was evolutionary. At first even the most expensive router equipment made could not handle the loads involved. The NSF had been using dual RS/6000 minicomputers on each MAE just to maintain the routing tables, much less pass traffic! Only as experience and available capital increased could more people be "good neighbors" on the "rings". This and the MAE and NAP service contracts also kept the growing pains as much as possible to just technical issues. There just wasn't room for much bureaucratic overhead!

Content could now be commercial, since non-commercial-only had been one of the restrictions of the NSF. CNN.com and Playboy.com came online, as did the AltaVista.com the first Internet search engine nearby at Digital Equipment. I got to see it when the entire AltaVista search engine was two DEC systems, in one room. The HTTP protocol and "browser" were first established and becoming popular around this time, and became quickly the primary method of accessing other people's data, and smart BBS operators around the world became dial-up real-time Internet Service Providers, some of which morphed into Netcom, AOL, JPS, a list too long and too variable for anyone to know them all.

The need for every content consumer to reach every content provider, or even just for this email to be able to reach everyone on this list, created a market for those who maintained routs to "everyone" to sell the service of being able to get from here to there. ISPs who didn't play nicely with others, like Alternet tried to do, didn't last long. Their own customers demanded the ability to reach everyone, and the sovereign consumer always wins in the end.

Everybody who had a clue knew that the MAEs and NAPs couldn't handle the traffic, and entrepreneurs quickly provided other "public" peering locations.

One such facility, the Palo Alto Internet eXchange (PAIX) in Palo Alto, California, was one of the .com boom beautiful creations. By Cromm, what a facility! I've never seen expensive track lighting inside a raised-floor facility before, or since.

The Cisco campus in San Jose, or @Home in Redwood City (long gone), those were beautiful and fun because people worked there. Beauty in a co-location facility is a pointless expense better spent on infrastructure, in my not so humble opinion, but I may be the only person who cares. Isn't beauty for its own sake, even if no one sees it, important too?

Some, like the beautiful PAIX in Palo Alto, California, were computing facilities which created the same kind of environment that the early MAE's had been. Others worked like the Pacific Bell NAP and AADS-NAP Chicago, and were virtual peering "points". Meshed networks that existed only by being defined by software within telephone switches. People built facilities and others came to use them, each free to offer desired services no matter what those may be. Freedom of Infrastructure had occurred.

Because of this Freedom of Infrastructure, the forces of free trade and competition created, in barely 3 exciting years, the universal public good we would recognize today as "The Internet" out of what had been a toy of government research facilities and universities which had languished in obscurity for the previous 20 years.


As an example of how quickly the net came on the scene, Bill Gates' never mentioned the Internet in his book that accompanied the launch of Windows 95, and for the first 6 months that Windows 95 was selling commercially, it didn't even have Internet networking. Microsoft, for all its supposed technical savvy, never saw it coming.


But the second printing of Bill Gates' book had a chapter on how important the Internet was to Microsoft's vision of the future, and Win95 quietly received both TCP/IP and a quickly re-branded Internet Explorer web browser.

It's easy to talk about the benefits of freedom. We can point to John R. Lott's books which show that when firearms are made less illegal, even a little, crime decreases and stays down. We can cite the Great Northern railroad, which eschewed government involvement and built a trans continental railroad which is still profitable.

I can talk about the reality of self-policing, spontaneous order and individual initiative to build "public" goods. I saw it happen.

Email ThisBlogThis!Share to TwitterShare to FacebookShare to Pinterest
Labels: Internet