Debian has a reputation in the world of Linux distributions as, well, "stodgy". Debian Stable is pointed to as being out of date, stale, boring.

Nothing could be further from the truth. The Debian developers have put together a titanic number of software packages, and done the work to make them function together like... "...like an enormous clock."

"The finest clocks have jeweled movements. Cogs that fit, and work together by design. I'm being metaphorical, Bob."

Several fine tutorials and demos have been posted of Debian since the release of Squeeze, 6.0, on Sunday. Here's one I particularly like:


But there is something more that I believe needs to be addressed. Just what do you get with one disk of Debian anyway?

I used Debian DVD#1 to see just what kind of variety a user could get out of it.


Edit: I forgot to mention that I downloaded DVD#1 using the Bit Torrent method, the most efficient way to distribute large files. It also puts a thorn in the paw of the RIAA/MPAA that Bit Torrent gets used to any extent for perfectly legitimate purposes. Two good reasons to use it. 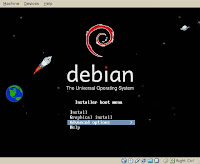 First of all, the Debian installer. Don't be fooled by what looks like a lack of graphics, the Debian installer has been in continuous development since 1993. Staying away from the Advanced Options is a good idea the first time, but those advanced options provide serious flexibility. 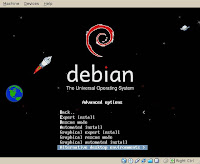 One of the most useful, and the point of this discussion, is "Alternative Desktop Environments". 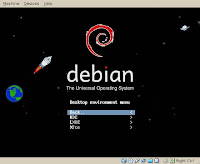 Those are the ones for which the Debian developers have created explicit installation routines within the installer. If you choose CDs, you have to pick ahead of time which you want, CD#1 (the default GNOME), CD#1-KDE or CD#1-LXDE-Xfce. There just isn't enough room on one CD to fit them all, which is why I chose DVD#1 for this demonstration. 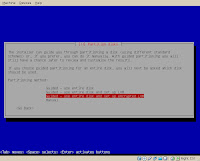 One more aside about the Debian installer before getting to the post install meat and potatoes: Encrypted Disks.

I think encryption is wonderful. Even though it adds the step of putting in a password before the computer will boot, having your file system encrypted can be a great comfort.

Debian makes that wonderfully easy, and its an option in the normal installation procedure. Fear not, the worst possible thing that could happen would be to have to start the install over again with a quick reboot. 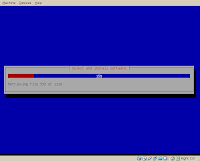 My base install from DVD#1 shows 1,118 files to install off of the disk. This will be higher if you choose server options in addition to your desktop, like DNS or web servers. It could also be a few one way or the other depending upon your particular hardware.


Edit: I forgot to say, what I installed was the default "Graphical Desktop", GNOME, with no additional options. This is the "click through" installation, easy-as-pie. Debian's ancient reputation for being "hard to use" hasn't been true for a decade. 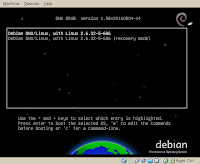 At last a reboot, just one, and the system is ready to go. 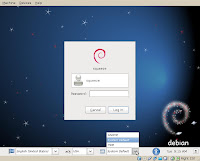 Here we are right away with what I am going to address for the rest of this posting: Flexibility.

Even though not one additional option has been added to the base Debian installation, there is already a choice of entering the GNOME or twm desktops. 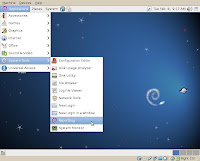 Here's GNOME before I added anything to the default Debian DVD#1 applications. You can see it's already a working system, with web browsers, OpenOffice, games, SIP phone, terminals, network manager, and so on. 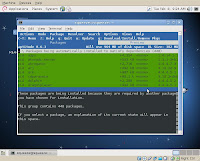 So at this point, I used the "aptitude" application to add KDE, LXDE, Xfce, Fvwm, Openbox and Window Maker, and the branded applications and games that come with each of those environments.

Also, make sure to remove NetworkManager if you install WICD. They conflict if they try to run at the same time. I think I will open a Debian bugreport on that fact and suggest that they make them conflict officially so you must choose one or the other in the package managers. Debian package management does that very efficiently when there are such conflicts. 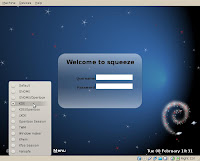 Once these additions are made, logging out will allow the user to choose, as in the GNOME Display Manager (gdm) above, from a list of available window managers and desktop environments. 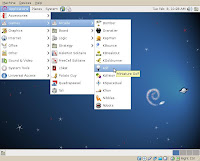 Here is GNOME after the additions. You can see the KDE games like Kolf (that's what I mean by "branded") show up in the GNOME menu, the same way GNOME applications show up on all the other menu lists. 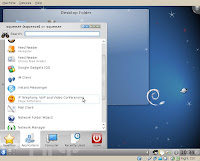 KDE4 and the default applications chooser. KDE4 will go back to the classic menu style if you like, by right-clicking on the blue K button. The option to do so is only in that location, not in the KDE configuration settings. 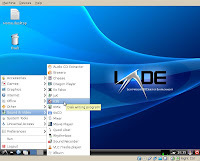 LXDE is next on the list. I opened the menu to show that the KDE application, K3b, is available as well as the applications that come with GNOME, LXDE and all the others natively. 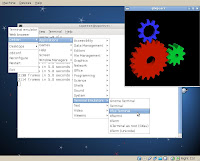 OpenBox, a minimal environment that makes LXDE and Xfce look wasteful of resources, but still everything runs just fine. Glxgears at 2100 frames per second in a virtual machine? Sure! Why not? 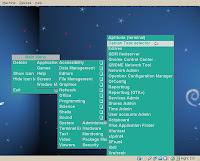 Twm is just a window manager, and Debian always installs it by default. It's good for getting into the GUI and debugging the bigger Desktop Environments if you need to. When it's running it doesn't have any background processes, cruft or whatever you want to call it. Lean, clean and mean! Great for those applications for which you need to wring the last bit of performance out of your hardware. 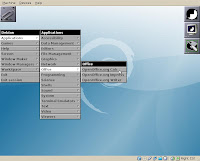 WindowMaker. Those who love it love it, and you know who you are. 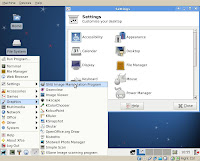 Xfce, which seems to be the choice of many people who became accustomed to KDE3. I, too, tend to prefer Xfce to KDE4, but I still want to use many of the KDE4 applications and games.

Debian flexibility makes all that possible. Remember, this is NOT accomplished only after pointing to the mighty Debian repositories, famed in song and story for their size and scope. This is just DVD#1. 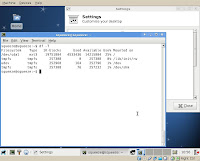 And, last but not least, just how much disk space did this entire installation of every desktop environment, their accompanying applications and games on the DVD require?

4.5GB. Could be more, if I'd added the web, ftp, dns and other servers, but this was a desktop comparison.

Debian has a reputation for size, and it is possible to overwhelm your system to some extent with such ease of adding packages through the apt front ends like aptitude, dselect, synaptic or just "apt-get install foo" from the epic Debian repositories.

But the real flexibility of Linux systems can be seen in how easy it is to customize an install to the needs and desires of the end user.

Even on "obsolete" hardware, such applications as Firefox, GIMP and OpenOffice/LibreOffice can be installed and run just fine, with the help of a frugal window manager. Before I finally retired a 1998 laptop in the summer of 2009, I was running the latest Debian unstable with the 2.6 kernel, OpenOffice, Firefox and Konqueror web browsers, Kmail, even Battle for Wesnoth, on a machine with 128MB of RAM and a 350MHz K6 CPU.

How, with only 128MB of RAM? By not trying to run KDE or GNOME. Just twm and olwm, launching only what I needed when I needed it. Still for all that, it rarely used its swap space.

I just didn't expect it to be snappy, or do full motion video or YouTube flash. But it was my backup laptop, and it worked just fine.

Flexibility. Go ahead and try a new desktop environment once in a while, see how things feel. You never know what you may find.
Posted by Curt- at 02:00