Ubuntu 11.04 Natty Narwhal and the Unity Desktop, for real this time!

If you're interested in "what has gone before", my previous article is for you. This entry will pick up where that one left off, with the actual successful loading and launching of Canonical's Unity Desktop.

The Ubuntu development community is racing ahead with Unity, including creating a 2-D Unity variant which will work under VirtualBox, which I must use since I don't have a spare system upon which to install Ubuntu Natty Narwhal for testing.


For installation and a run-down of default Ubuntu, you can see my prior article on Natty Narwhal, which begins "at the beginning."


I want to thank TomH from the Debian-User mailing list for forwarding me the Unity 2-D site, which he says he read about at Phoronix, a remarkable web site in its own right. I find Phoronix's speed and function testing of new Linux kernels as they come out very interesting. But back to Unity: 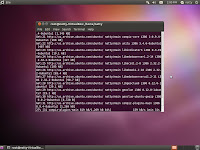 So here's what to do. Get a terminal window open, under Accessories > Root Terminal, and type the following: 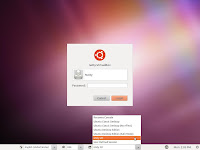 Then logout and when you get the login screen you will see the option for Unity 2D. 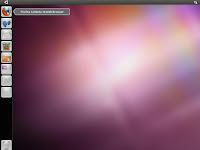 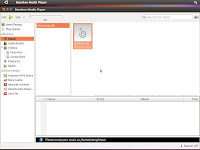 With a basic selection of installed applications down the left side, I think this something that is going to work best for people who have a limited selection of applications that they use regularly. I like the way the tab vanishes when an application window would otherwise overlap it, and springs back when the cursor hits the left side of the display, allowing those big buttons not to be too abusive of screen realestate. 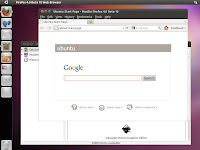 As someone else pointed out, computing is being done on wide screens now, so while vertical space is at a premium, horizontal space can be spent on things like those big, friendly buttons and not actually be in the way.

I did have trouble with two things, that I'm sure will be ironed out as this alpha release of Unity becomes more robust. 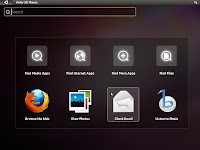 First, I could find no way to change workspaces back to "upper left" where the Unity buttons were. I could use the "search" function, but no quantity of clicking left or right worked. Now I don't have a mouse wheel on this recycled optical mouse of mine, due mostly to the fact that I ripped it out with great satisfaction when I found it was repeatedly scrolling my applications without my permission. I also don't use workspaces myself, preferring to minimize windows rather than change context.

That's another of those personal choices that Linux caters to. I'm sure some people love workspaces. I used them when I had reasons to back in 1992. Imagine that, a "new" desktop feature that so many people are just discovering. And golly, look at that! Olvwm is available in Debian, for that retro-feeling. It is, however, NOT an available desktop on DVD#1, due to the fact that the Debian Popularity Contest application reports 55 people have it installed, and only 15 have used it "recently". World Wide.

That same report says that 6 people in the world still have Linux kernel 2.6.14 installed, although no one seems to be using it. Isn't that amazing?

At some point, but not today, I fully expect that "Unity" will join the ranks of Window Managers and Desktop Environments in Debian. I think it has a great deal to offer, and I agree with some other folks who have suggested that the design lends itself well to tablets and touch-screens. We shall certainly see. 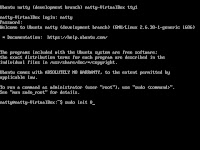 The other minor problem, I could not find a log-out button in Unity. Not a menu entry, no right-click-on-the-desktop, nothing. I am certain that this is because something wasn't quite working right, I had several pop-ups saying "Software crash, do you want to send a report?" So Unity, at least Unity 2D, is showing it's age, that is, it's lack of age.

So I used Alt-F1 to jump to a console, and issued the "Shut her down, Scotty, she's sucking mud again" command, # sudo init 0

Thank you for joining me on this journey of discovery.