You know the universe is out to get you when....

Update: Part 2 has been posted.

Prior to Friday, I had exactly one problem with a motherboard, the clock battery leaked and damaged the traces. That system had been running for 5 years in a friend's garage, slowly rusting while running DNS, WWW, SMTP, my "blog" before the word blog was invented, and whatever else I needed in a server, but time did work its inexorable will. 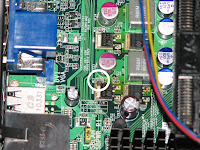 Friday, my server was purring along just fine, and then it stopped. I thought it was a power supply problem, but as I was trying to determine if the power supply was still working, I saw a small orange flash.

The next power cycle attempt also got a bit of orange, but it was not small, and the smoke and cracking sound was more than clear as to exactly what had gone wrong. I have a picture of the offending surface-mount component, but it will be hard for me to post the picture due to the other problem. Note to self, always keep a working laptop for just such emergencies.

"Other problem? You mean this gets worse?"

A couple months ago, the utterly unreliable city-utility electric power went out, again, for a minute or two. I have never lived anywhere that I knew I had to keep candles available because of power failures. The perverse incentives in a monopoly deserve their own rant, so let's move on.

Prior to this, the computer(s) had simply powered off, and Linux showed its robustness by never having problems booting back up.

This time, the Radeon onboard video became unreliable. Static, white lines, just not happy. Something had gotten damaged in the spike as power was restored. Too late, but still something that I should have done long before, I went out and got a battery UPS. It's one of those things I will tell any client that depends upon their systems, "Get a UPS", but I had not done it for myself. It also makes a nice foot-rest.

I had a spare Nvidia PCI graphics card sitting around from an earlier project which provides perfectly good accelerated performance for my needs, and so life went on.

Friday evening, as I was using Skype, the microphone and speakers in the back of that on-sale monitor got too close together as I was working the wires around, and a SCREEEEEEEEEECH of positive audio feedback occurred. Here's pretty much what it sounded like.

I dropped the microphone/headset to the floor, pulled out the microphone cable, but the damage was done. The on-board audio sort of works, but it has awful static and the timing with video is shot to the point of uselessness.

Having another audio card in my green parts box sitting around from an earlier project, which would provide perfectly adequate audio for my needs, I put it in and thought things would work. But no, the audio, while without the static, hiss and whining, still skips often and randomly if I try to do anything else while the audio process is running, and often but less severely when I try to do nothing else.

But basically, YouTube, Pandora, or even watching a video locally, the skipping audio makes it pretty much a waste of time.

Yep, more. I tried plugging in my USB card reader to upload the photograph of the fried surface-mount component on my other motherboard, and got my first Linux kernel fault in a very, very long time. A "hung task timeout". So it wasn't a core Linux kernel failure, just a driver failure, but it shows that I'm typing this on a very unstable platform. Good thing I've got full backups!

Both of these systems are well out of warrantee, of course, so I have to order two new motherboards tomorrow (Monday) morning. I have no idea how long shipping will take, but seriously, crap can happen, any time, anywhere. 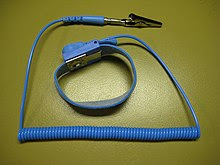 And no, I won't forget the static strap when I put them back together! I have one of those in that parts box, from an earlier project, which should provide perfectly adequate service for my needs...

Pictures of the rehabilitation will be posted when things work again.

Email ThisBlogThis!Share to TwitterShare to FacebookShare to Pinterest
Labels: hardware